To perform the Import operation, either click on the Import / Export button in the Administration overview or navigate to the page using the menu:

Example of the Import tab

The data in the columns are the following: |Column Name|Description|Comment| |---|---|---| |Uploaded|The time when the Import Module was uploaded|Either by file or direct| |Name|A brief summary of the Import Module|Generated by the system and bases on Export options| |Description|Content from the 'Confirm Export' step|Optional|| |Source Version|The Source Nodinite Version at the time of the Export|It may not be possible to perform the import operation if the Import Module is too old| |Source Customer Environment|The name and type of Source Nodinite instance|| 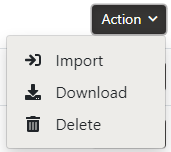 In this guide we will use an Import Module with one Integration, since this is the top level object in the Repository Model and all related child objects will also be included in the import by default.

In the tree, select items to be Imported and click on the Next button

In the Affected item(s) step, Nodinite compares the current content in the instance with the selected items to be imported. If there is a conflict, you are given the chance to perform modification. The right side is the net end result.

Example of a conflicting change

Once you are done merging the result, click on the Start Import button to perform the Import

If there are any problems during the import, these are presented, and you will need to either abort, or go back and resolve the conflicts.

Example of a failed import operation

If the import operation succeeds, you are presented with a success alert.

Example of a successful import operation

You can now use the imported items.